Water is essential in human life. Many places are out of the reach of water supply, e.g. deep forests, mountains or hills etc. We are the well drilling contractor experts in water well drilling, even deeper than 1000 ft. 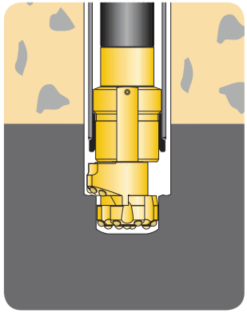 When drilling starts, Odex remear swings out and reams the pilot hole wide enough for the casing tube to slide down behind the drill bit assembly. When the required depth is reached, rotation is reversed carefully whereupon the reamer swings in, allowing the drill bit assembly to be pulled up through the casing. 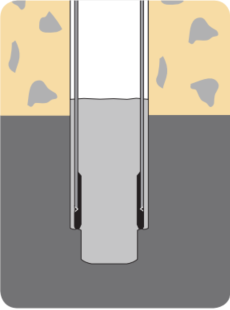 Casing tubes that are to be left in the drill hole should be sealed at the bottom of the hole by means of cement grout or some other sealing agent. Drilling continues to be desired depth in the bedrock using a conventional drill string.

water diving or water dowsing- Before technology came about that would allow us to “see” into the ground, people depended on dowsing (also known divining or water witching) to find water wells, metals, gemstones, and even missing people and unmarked graves. Although dowsing has never been scientifically proven to work in a controlled setting, the practice remains popular in many parts of the world. It’s been suggested that humans may be able to sense electric and magnetic energy that’s invisible to the eye (as many animals can) and subconsciously manipulate the dowsing rods or pendulum to reflect that information (the ideomotor effect).Whether you’re a stout defender of dowsing or you think it’s hogwash, doing your own experiment can be both educational (from a historical perspective) and fun.
Note- at any point science or scientific studies do not provide any kind of relationship with dowsing.

Scientific groundwater exploration– Scientific explorations are completely related with Geo-physics. Scientific surveys are carried out through professional geologists based on geophysical mapping, earth resistivity check up, topographic conditions with latest groundwater modelling softwares which are more reliable in understanding the rock formation and exposure of drilling the borewell to approximately judge the maximum depth from soil to the rock, from hard rock to soft rock No. of sources and many more attributes.
Vertical Electrical Sounding is one of the very common geophysical methods used for domestic borewell exploration. However, sufficient open area around the location is needed for conducting the survey
Based on the location and amount of land present Geologist performs survey using Earth resistivity meters either by Resistance check up or self potential check up to get accurate results.
1. resistivity probing
2. geophysical mapping
3. groundwater modeling


STEP-2
BOREWELL DRILLING
Borewell drilling completely depends on the geological formation amount of vacant land present approximate depth needed and the transportation bay.
Currently in India we follow Pneumatic Rig to the latest High-pressure, Super fast, Hydraulic Rig both on surface and in well by 4 ½ “, 6″, 6 ½ “, 8″, 10″& 12″ bore wells. 4 ½ ” Tube wells were drilled in open wells.6 ½ ” drilling is the common drilling size in South India. The 8″, 10″, 12″ are dug in Northern India like Rajasthan, Madhya Pradesh, Gujarat & in Coastal areas.
Technically 4 ½ “, 6″, 6 ½ “, 8″, 10″& 12″ are the diameter of the drilling Bit to ensure the size of the borewell.
During a Borewell Construction other than drilling the other expenses is on the casing pipe.
Casing pipes are used as the walls in the soil from the surface to the Rock which varies in depth accordingly from one place to another based on geological formation and topographic condition of an area.

Borewell Endoscopic Camera Scanning
Borewell Camera scanning is one of the latest technologies to directly view the Borewell by inserting a specialized geological waterproof camera inside the borewell post drilling to clearly understand the rock formation number of sources through which we are getting water, if their is any silt or boulders present, is the casing pipe inserted properly and for many more geological factors.


Motor selection and Installation.
Based on the Borewell endoscopic scanning Report we can decide to purchase the motor which suits your Borewell.
You might have found that there are only two variables required to calcuate the water pump HP.
1) height of total lift of water
2) required flow Please take total height in meters and flow required in liter per minute. now multiply height(in meters) and flow (in liters per minute) now divide this by 4500 you will get theoretical HP of the pump.
Now there is a secret to calculate actual HP of the pump In my practical experience i did not find pump efficiency more than 30 %. In most cases it is less than 30 %. So to calculate actual HP you should multiply theoretical HP by 4. Actual HP is 4 times more than theoretical HP.
Second secret, Please calculate total suction lift from pump to sump bottom. please ensure water pump is capable of producing so much suction.
Third secret, please add 20 % to your actual height of water lift. These are called frictional losses.
Fourth secret, submersible pumps are more efficient than monoblock pump.

Tips:
1. Try to find 3 phase availablity in your street.
2. Do you require really 3 phase or single phase pump KW ( 3 phase deposit is higher than Single phase, I think for monthly bill be same for 3 phase or Single phase). Check with pump expert.
3. Speak with nearby house people having bore, to know about water availablity during summer. (Which helps to select the pump) Sometimes, if you go for higher suction power motor and if your bore can’t yield for the motor capacity it will be problem.
4. Anyway have pipe routed to Sump & OHT with control valve. It will helps during summer time, if your bore or pump losses it efficieny.
5. Try to avoid number of bends at delivery line from bore.
Please place the borewell motor at 20 to 30ft from the bottom point of the borewell in case if the yield falls down too u will not face a problem in the water supply. if you place at 400 ft and yield is less in summer then you have to rework to down the motor further and if motor runs without water there is a risk of motor failure.
As one time effort place the motor at maximum best point. Dont look at the pipe and wire cost, Do it right at the first time, Be pessimistic for this work


Borewell Motor Installation
As todays borewells are reaching a depth of about 1000 to 1500 feet installation of motor manually is very difficult for this reason we have adopted the motor lifting and installation cranes which makes the work easier and mostly safer the Human errors.

Estimation- For Installation and lifting of motors from Borewell Rs 3000 to 5000 depending on the depth of the Borewell.
Here completes your Borewell Construction work.